Learn how to use the Sequencer module in Polimod. It could become heart of your performances! 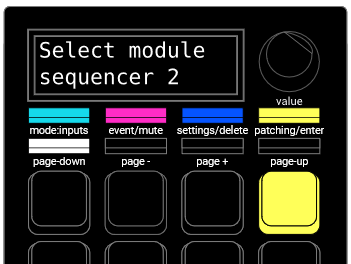 In default mode, a sequencer tries to adjust the length of the sequence to the performed pattern, without leaving silent gaps. This means that most of the times, parts of the recording are cut off the sequence.

You can change the recording behaviour by using the recording configurators. These are present in the last buttons of the settings menu.

Events are created simply by pressing a button in the matrix. If an event is present in the same button as the pressed, and this event has similar characteristics, it will be removed.

The duration of the events is equivalent to the amount of time that the button is pressed when creating it.

To remove events regardless of the layer, press the shift button (first one, top row). Events of different header, however, can not be accessed using this technique.

In this sequencer, layer is equal to the event being created. The underlying assumption is that you will rarely need to create two events of similar characteristics at the same time.

To select the event, press the event button; this displays an event configurator. The event’s first number (note, if it is a trigger event) becomes the layer. The numbers 2 and 3 are ignored with respect to the layer. The events whose number 2 is different than focus, however, appear in cyan instead of white.

By pressing the shift button (first, top row) you can set the focus to every event with the same header. Events with other headers appear red. This is useful to remove events without having to meticulously go layer by layer. To remove events of different headers, however, there is no shortcut.

When an event is removed using shift, the event configurator is adjusted automatically to be the same as the removed event. This is handy for when you need to move an event to a different place.

The sequencer offers many different ways to change the length, because changing length can be a way to perform. All the length configurators are present in the configuration menu; settings button, third button in the top row.

Folding is changing the sequence length to the double or half of the current length. It will be easiest if you set the sequencer length to 8 or 16, to understand the effect of folding.

If the length of the sequence is larger than 16, it is possible to edit the entire sequence by using the page buttons. For lengths higher than 128 it gets harder to navigate.

Any page can be selected by using the page configurator. This configurator is selected by pressing the matrix button 5 while hodling the settings button. The screen should read “set page”, followed by the current page.

By shifting the sequence, two different things can be understood, both of which are possible:

Compensated shift is specially useful to put the events where you expect. A typical situation is that, after recording, say, a drum pattern, the strong notes end up in odd buttons. It is often expected in a sequencer that the strong events are placed in even buttons, such as the button 0.

Another use to this shift, is to hide parts of the sequence. Let’s say that you want to smoothly make a melody to disappear. You can slowly shift the melody outside of the sequencer boundaries,

Playhead shift merely adds or subtracts to the playhead position, causing the sequence to offset from it’s original position.

This technique is specially useful when you have the sequencer well synced to other sequencer or gear, but the step position is not right. First determine how many steps you need to offset it with respect to the other sequences, and then rotate the encoder for the same amount of clicks that you calculated.

Other ways to offset the sequencer are by external module or by jumping. When a sequencer receives a trigger on (or note) event, it jumps to the step indicated by the number [1]. It is possible to manually jump to a step by pressing shift+event+the desired step button.

This technique requires some practice. It allows you to program every n amount of steps, all at once. [to be completed]

A sequencer maps directly one step per step. It is possible, to make it faster or slower (e.g. double or half the speed). This affects the amount of clocks that it takes to advance one step; and the length of those events too (for the case of trigger events).

This technique is specially useful for events that need to happen less often. Let’s say that you have one sequencer with length 5, while all your song is playing at 4/4 metric. In this case, you can add a sequencer that resets the position of the 7 steps sequence back to 0 every 128 steps. Another example is when you are using the sequencer to set the tonality of a melody at every repetition of the melody.