Get up and running with the virtual Polimod

to run virtual polimod, you will need the following components installed:

Getting and installing the virtual polimod

setting up a MIDI synth

It is up to you what sound engine to choose. Prefer to use software with low latency (so that you can play intuitively). It is recommended to assign one midi channel for each different instrument. For example: channel 1: piano, cannel 2: bass, channel 15: drum kit, channel 16: another drum kit. It is also possible to use a physical synth or drum machine such as Electribe. If you just want to test, it is possible to use the built-in midi synths such as ‘Microsoft GS Wavetable Synth’.

Configure your synth to receive midi events for percussion sounds in channels 14 to 16, and to receive melodic sounds from channel 1. The default patch of the virtual polimod is set up to send messages to four midi channels:

Note: It is also possible to change these default channels, by modifying the file named “default-patch.js”, inside the “patches” folder. It is easier, however to adapt the synth to the default patch in order to get started in a simpler way.

Setting up a midi interface

The point of this step is to create a MIDI to which the environment can connect to, in order to send its midi output. You may already know how to do this; otherwise, here some options are briefly explained.

Selecting a Midi Output from a Calculeitor 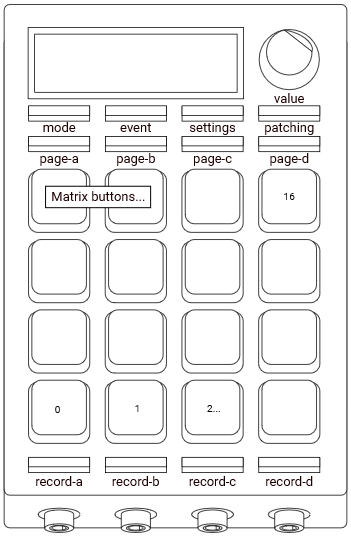 With polimod you are not limited to only one MIDI output or input. You can route any input or output to any modules you want.

* Note: due to a bug in the current version of the software, the screen might display the previoulsy selected interface. Just press & release the same "settings" button again. There is no need to select the interface again.

testing that everything works

After setup it should be possible to run the virtual polimod software, and make sounds with it.