In this essay I will explain some conclusions about the haptic affordance of different typologies of knobs. These observations came into after observing and testing different knobs in various designs. The initial realization consists in that turning a knob is not done only by one defined haptic action, but there are at least three different ones. Based on this, I will establish that the selection of a knob can be based on functional, and not only aesthetic grounds. According to this, I will only take into account the mechanical affordance as criteria for categorization and analysis, and will not touch subjects such as aesthetics or cultural significations of the different knobs. 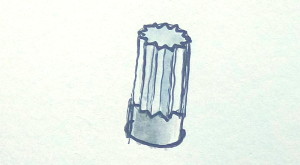 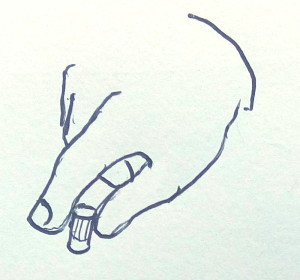 When I began my interest for the design of synth interfaces, I thought that knobs were mainly an aesthetic decision. As my interest was mainly to experiment with different interaction patterns in the software, I used to just omit putting knobs to the potentiometers and encoders in my creations, and leaving the potentiometer shafts just as they came since they were good enough.

To an untrained eye, there is only one requirement for a knob design, which consists on offering good grip, and a pleasing appearance to a rotary actuator. There are actually two different actions that can be used to turn a potentiometer's naked shaft, as illustrated in figs. 0 and 1.

The knob is grabbed between the tip of the thumb and tip of the index, as if the hand was about to pick the knob. The pinched rotation is done by rotating the whole hand, in a similar way to how it is rotated when using a screwdriver. (fig.1)

The knob starts pinched, but while the knob keeps turning, the shaft starts rolling against the index's side, and around the surface of the thumb. The movement is similar to the one you would make if you had some glue in the tip of your thumb, and wanted to roll it into a ball. You will be able to keep turning the knob as long as your thumb's tip has enough surface.

This action consists on putting the finger inside a finger slot, and moving the finger in a circular movement around the rotation axis of the knob. The archetypal example of this, is the dialing disk that the old phones used to have.

The categorization of knobs here will be determined mainly according to their response to the possible haptic actions. A different hypotheses would lead to a different categorization 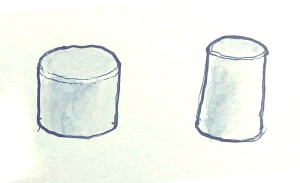 These are examples of other knobs that can be turned using the same action of pinching. The difference is that the knobs become bigger, offering some force advantage to the hand granted by a lever effect. The turning action, however, needs to become a bit different. Depending on the radius of the knob and the friction of the material/ shape against your skin, you may not be able to roll the knob anymore, but you would need to pick and turn the knob by picking repeatedly. It is not a good option for actuators with a large turn angle range. These knobs found the most often in encoders of music controllers such as Maschine, or Novation Circuit. A revolved knob can use high friction materials such as rubber, or use ribs to improve the grip. 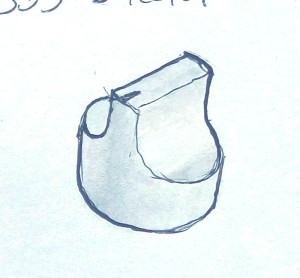 Knobs that only allow to be pinched are mostly used for selectors that have a number of discrete positions. They are characterized by strongly representing a direction, and having a non-revolved body. Shapes are designed having in mind that there may be a need for more force in the action, since the selection device keeps the rotation of the knob at quantized angles by using a spring loaded mechanism. Often these selectors have a smaller rotation range. When the rotation range is greater, the user will need to release and grab again the knob. Examples of use are: TB303 mode selector or a heat intensity selector in domestic kitchens. 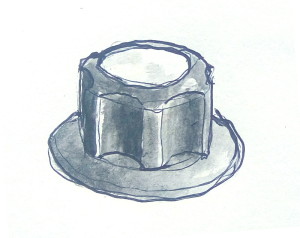 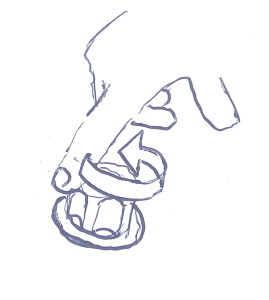 Moog knob suggests additional gestures to turn a knob apart from pinch and roll. An attentive observation suggest that the cutouts could be associated with the shape of a finger. These cutouts are not designed in the same way as the grip marks are included in a poentiometer: the ones in the potentiometer ensure that it's easy to turn the knob by adding friction with the finger, but the Moog knob cutouts are too big for this. In relation to a finger, these cutouts rather offer an envelope to the finger, thus making the dialing action possible.

Any knob that offers a steep angle from a polar coordinate perspective, can allow for dialing, depending on the exact parameters of the steep shape. A thought experiment would be to imagine a knob that is shaped as a cube. The cube shape would allow for dialing the position, because it has steep angles in a polar perspective. A polar to Cartesian transformation of it's shape will reveal the steep angle in a more intuitive way: 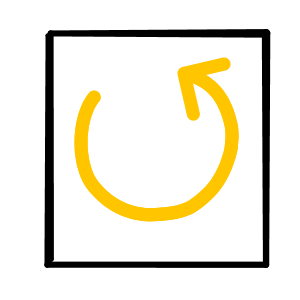 When it comes to encoders, which can be turned an indefinite amount of times, this offers an advantage: while in the case of the pinchable knobs, when turning, you eventually run out of finger during a longer turn, in a knob that you can dial around with a single finger, you will also be able to turn that knob any amount of turns without having to release the knob. While pinching a knob, there is only an angle range that you can turn the hand, and as in a screwdriver, you need to release the grip, reset the hand position, and grip again.

A special example of this typology of knobs, is the one present in the TB 303. While the moog knob offers two affordances of pinching and dialing. This knob, in addition to that, allows to roll the knob between the fingers, in the same way as in a potentiometer.

We have seen that each type of interaction may require a different knob type. The parameters that were observed, determine the knob choice are:

Get 3d models for encoder knob