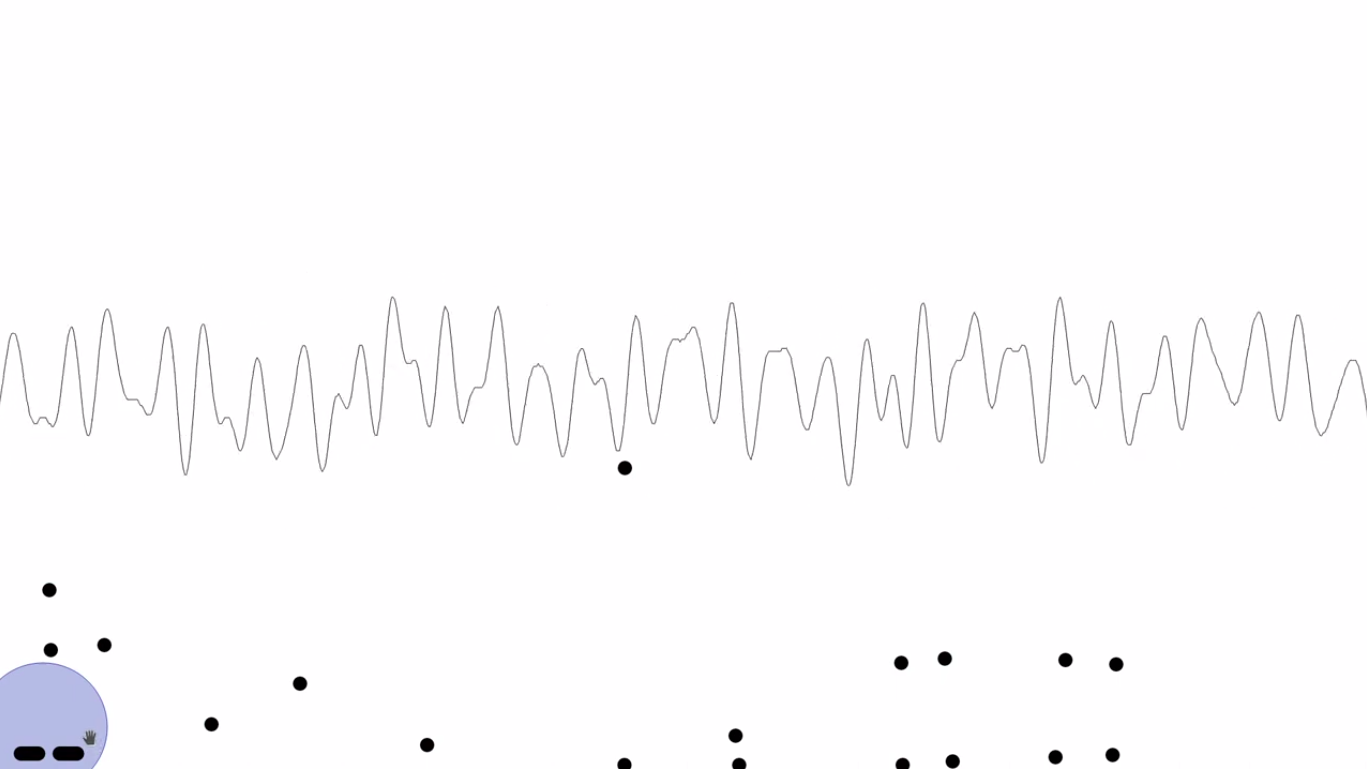 During the development of my current procedural composition projects, I realized that I needed some way to create arbitrary tuning systems, or sets of frequencies in an intuitive way. This way I could understand and work better with tuning systems. This project is almost an accident. I merely defined a user interface that lets one place tone components in the screen; the horizontal axis representing the frequency, and the vertical axis representing the amplitude.

After rapidly creating this interface, I started having a lot of fun with it, and it became it's own exploration. I decided to capture the experience in a couple of videos called Harmonic sculptures

Go on and play! Sine desk (note that first click will not produce any sound, the second click should.)

The first iteration of this project presented the horizontal frequency axis in a linear fashion, meaning that each pixel represented a certain frequency interval, thus preserving the linear relationship between frequency and space. This mapping is very different to how we perceive tone, though. Our perception of tone is logarithmic. We understand tones in comparison to one another, which naturally leads to tones being relative ratios. When you use a linear mapping, the effect will be that position changes in the lower frequencies (at the left of the screen) will be much more noticeable than changes at the right of the screen, therefore the relationship between tone and position perception become out of match. The change in pitch on the left side of the screen is much more dramatic than the change in pitch on the right side of the screen.

Using the linear mapping of x-coordinate to frequency, an interesting fact becomes apparent: if you offset a bunch of frequencies preserving the structure of relative frequencies in a linear fashion, you will get a perceptually changing harmony. It's an obvious fact since harmonic perception is on a logarithmic scale, but one is not instantly aware of this.

A beating pattern is a perceptual phenomenon that occurs when a listener is presented with two tones of exactly the same periodic wave shape are closely different in frequency (for example, one sinewave at 440 hz with another sinewave at 441 hertz). The two different tones will interact with each other at some points cancelling, and at some other points adding together because of the slow drift between their positions in the cycle. A perceived third tone, or rhythm emerges that consists on the changes between the cancellation and addition phases. The frequency of this beating pattern is the difference between the two frequencies. (in the example, 1 hertz)

By changing the tones linearly, also, the frequencies of beating interference patterns remain the same in terms of absolute frequency. This is a mathematical phenomenon that also has a perceivable effect: although the tone changes, if there are any perceivable beating patterns, these remain

Transposition of beating patterns on a logarithmic mapping.

If we modify the code to present us with a logarithmic mapping of coordinates to tone, we get a different behavior. Although translation of position to tone is a very artificial one, the positions seem to match better the tones. From a user perspective, the changes in frequency seem to even out through the width of the interface. This only confirms a widely spread user interface technique used in many modern audio applications such as equalizers, fft's and so on.

The importance of beating patterns in harmonic drones

It was observed that a certain level of disharmony is beneficial for the creation of musical tuning systems. This natural disharmony has been permanently embedded in our equal intonation system because of the imperfect way that it is defined. In other forms of musical expression, disharmony in a tuning system might also been present due to the impossibility of creating a perfect tone on a mechanical instrument, due to the mechanical impossibility of precision and external factors that cause tonal drifting on any natural instrument.

It was observed that creating a mathematically perfect harmony tended to cause a perceived single tone. This is logical, because perfect harmonies produce periodic sound functions. Two frequencies that are in a relation of 1/3, for example, have a periodicity of 3 cycles, leading to what it sounds like a different waveform on 1/3 the frequency. In this way, perfectly harmonic tones tend to 'blend' and form a composite timbre. If the tuning between the two tones is not perfect, however,complex beating patterns emerge and the two frequencies become distinguishable.

When playing musical patterns, a harmony of imperfectly harmonized tones subjectively tends to feel a bit more alive than a harmony of perfect tones. Besides the point of beating pattern, remains the question of whether this is a consequence of growing up accustomed to equal temperament.

This experiment led to the question of modulation: how could we move from one arbitrary tuning system to another, in a way that no inharmonicity is incurred. Modulation is the reason why the equal intonation system was created in the first place 1